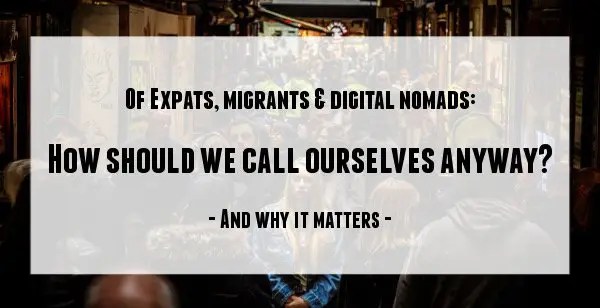 Here’s a common scenario. Two people working side by side in an international organization. One sought the job online after working in similar organizations around the world. The other, applied for the job after arriving on his own fleeing a desperate economic situation in his home country. The question that arises is, are these men both considered expatriates, or is one an expat and the other an immigrant? Would the picture be clearer if we knew more about the two men? If so, then why?

As commonly known, words have two possible ways of being understood (not defined). There are the static dictionary meanings previously found in hardback texts now online, referred to as the denotative meaning. Then there is the meaning derived from our life experiences and yes, prejudices and biases, referred to as the connotative meaning. Would it make much difference if you were told one of the men is African and the other not? One has a university degree whereas the other does not?

Well according to denotative meanings, an expatriate is: someone who does not live in their own country as mentioned by Collins Dictionary. For a long time, that term was synonymous with a situation of exile, forced or voluntary, when being condemned to stay abroad following events in your own country. We see a somewhat negative tone here but it seemed to have changed in recent history.

The main reason for “expat” becoming more positive is probably taking roots in how it is used to define a more elite fringe of the population that in the very early days of globalization (colonization era), was more bold, adventurous, or privileged than the rest of the normal population.

Now an immigrant has been defined denotatively as: someone who is living in a country which is not their own as mentioned by Collins Dictionary. Some definitions add to the term immigrant a sense of permanency in the foreign land, but this does not take into consideration the number of expats that have not returned to their countries. Surely, as foreigners, if we left our home countries, should we not be immigrants? Is the picture getting any clearer?

The classification does matter, because these terms can in some situations be used to discriminate or to dehumanize. Denotatively, the words bear resemblance however, connotatively, the terms take on different meanings. Expat symbolizes some sort of privilege almost exclusively held by people originating from western countries. They are treated (whether deserving or not) as educated, privileged professionals working abroad, whereas migrant workers are seen as laborers (educated or not, skilled or unskilled) having a lower status.

Having myself worked with a number of well-educated professionals from Africa and Asia, I have yet to see them referred to as being part of an “expat community”. However, as the number of people working outside of their home countries increases, we see many referring to themselves as global citizens. Possibly a more suitable term for humans regardless of their education, status, wealth, race, or circumstance.