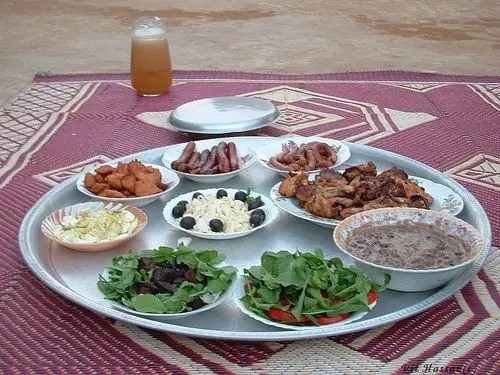 The tradition of hospitality is of utmost importance in Sudan, particularly in the blessed month of Ramadan. Communal breakfast Iftar is a continual tradition amongst all Sudanese regardless of ethnic background or region. Preparations for the month start weeks in advance with the milling of extra flour, the drying of meat sharmout and onions, and the making of a special beverage called Abrey, also referred to as Halo Murr.

Besides the absence of the ritual tea and milk, mornings in Ramadan are routine. The businessmen and the employed continue in their occupations. If school is in session, the children report dutifully. Nothing much seems to change until after the noonday prayer, Thuhur.

Daily preparations for the Iftar start from about 2 to 3 o’clock in the afternoon. Throughout the neighborhoods the smell of sautéed onions wafts out into the streets.  Over the compound walls, the clanging of cooking utensils and pot tops, and the whirring of blenders are heard by passersby walking along in most neighborhoods.

“As the sun’s descent reddens the western horizon, and the haze starts to dissipate, the first wave of youngsters bring out colorful woven mats and line the streets.”

An hour or so before the evening prayer Magrib, the girls and women have finished the cooking and begun cutting the salads. Blocks of ice are broken and the pitchers for juice lined up. Finally the main dishes for the large silver platters to be taken out to the streets are placed and covered. The main dishes are either porridge or pancakes with savory toppings called mulah. Smaller dishes of lentils, dates and chick peas garnish the platters. These are the Ramadan basics. Families with a bit more disposable income may also include a roasted meat or chicken dish; rarely will there be fish.

Once the men come out, the streets are blocked, no vehicle can pass. Whether someone happens to be running late or away from their neighborhood, whether the passerby is walking or driving, the neighbors insist they stop, sit and partake of the breakfast.

At this point, the only sound heard is the clinking of ice cubes in the pitchers and the refreshing sound of liquids being poured into glasses.

Minutes before the breaking of the fast, silence. Some of the men and boys gaze upward at the sky, others count down on their watches or mobile phones, patiently awaiting the buzz of the masjid’s sound system over the speaker and succeeding call to prayer.

KG News, 1 year ago 2 min read
Phrase of the Day

Phrase of the Day: in a rut