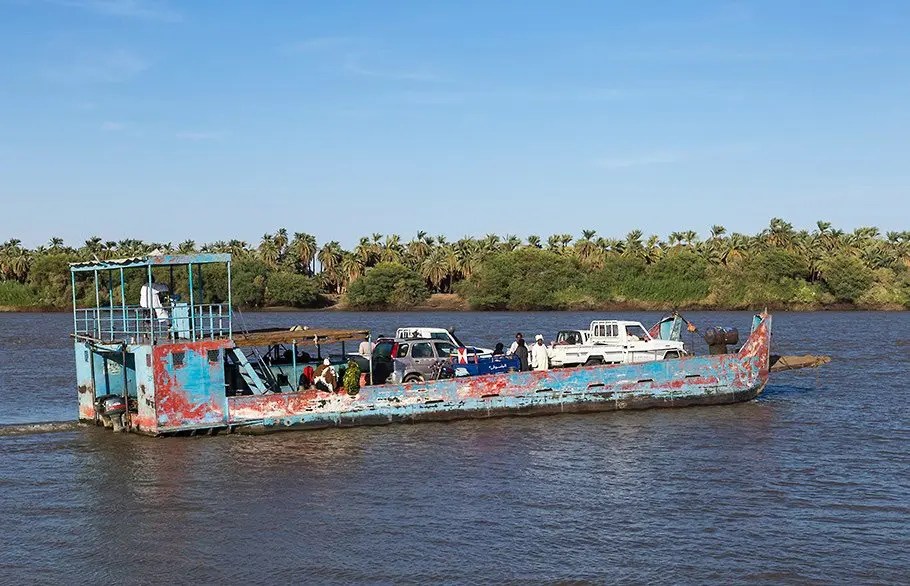 There’s something magical (for lack of a better term) about ferries. Not so long ago, there were a number of pontoons ferrying people and animals back and forth across the Blue Nile, but now, many of them have been retired by bridges. One ferry, in particular, is sorely missed—the Hasahasa, Rufaa’ ferry in al Gezira.

Until the building of the bridge crossing the Blue Nile at Hasahasa, the ferry was part of my weekly routine. Every Thursday, I would leave the school I was teaching in and make a beeline by bus, foot and sometimes donkey cart, to Souq Shaaby Khartoum’s bus terminal. For those of you who remember, it was about 20 years ago before the opening of the Mina Bari station near Souq al Markizi.

Once at the terminal I’d navigate the ticket hawkers and ambulant vendors, hurdle luggage and piles of boxes waiting to be loaded, and scramble for a ticket. It would be late afternoon; early evening and I didn’t want to miss the ferry.

After a week of pupils, parents, and administrators, I looked forward to the ferry ride. Albeit the ride took maybe 20 minutes at most, it made complete the transition from city to countryside.

The bus ride to the Hasahasa ferry landing was about two-and-a-half hours. Usually there was a line of vehicles waiting to board. While waiting in the line, many times I got off the bus and walked down to the landing area near the water. Once the ferry arrived and dropped the gangplank, I’d board the ferry and position myself against the rail. The sound of the water, always swirling, lapping the rusted sides of the ferry relaxed me. And once we pulled off, the illusion of relative velocity (the illusion of the land moving instead of you) entertained me.

Along the rails of the ferry men, traditionally dressed with waistcoats and herder sticks, would conversate, frequently spitting into the swirls of water. The women generally sat around the sooty engine room. Often livestock, goat, sheep, cows, or camels, were also being transported. If the herd was large, sometimes the cars would have to wait for the next ferry.

About half way across the river, the captain would cut the engine and the ferry would just drift. At certain point near the river bank, he would reverse the engine and ease into the landing. Once docked, I’d re-board the bus or take one of the many white Toyota trucks heading towards the town of Rufaa’, east of the Blue Nile. My journey wasn’t yet complete, I still had another leg to go, but mentally, I had transitioned and into being a villager. Even if it was just for the weekend.